The story of Zai: a new force in financial services 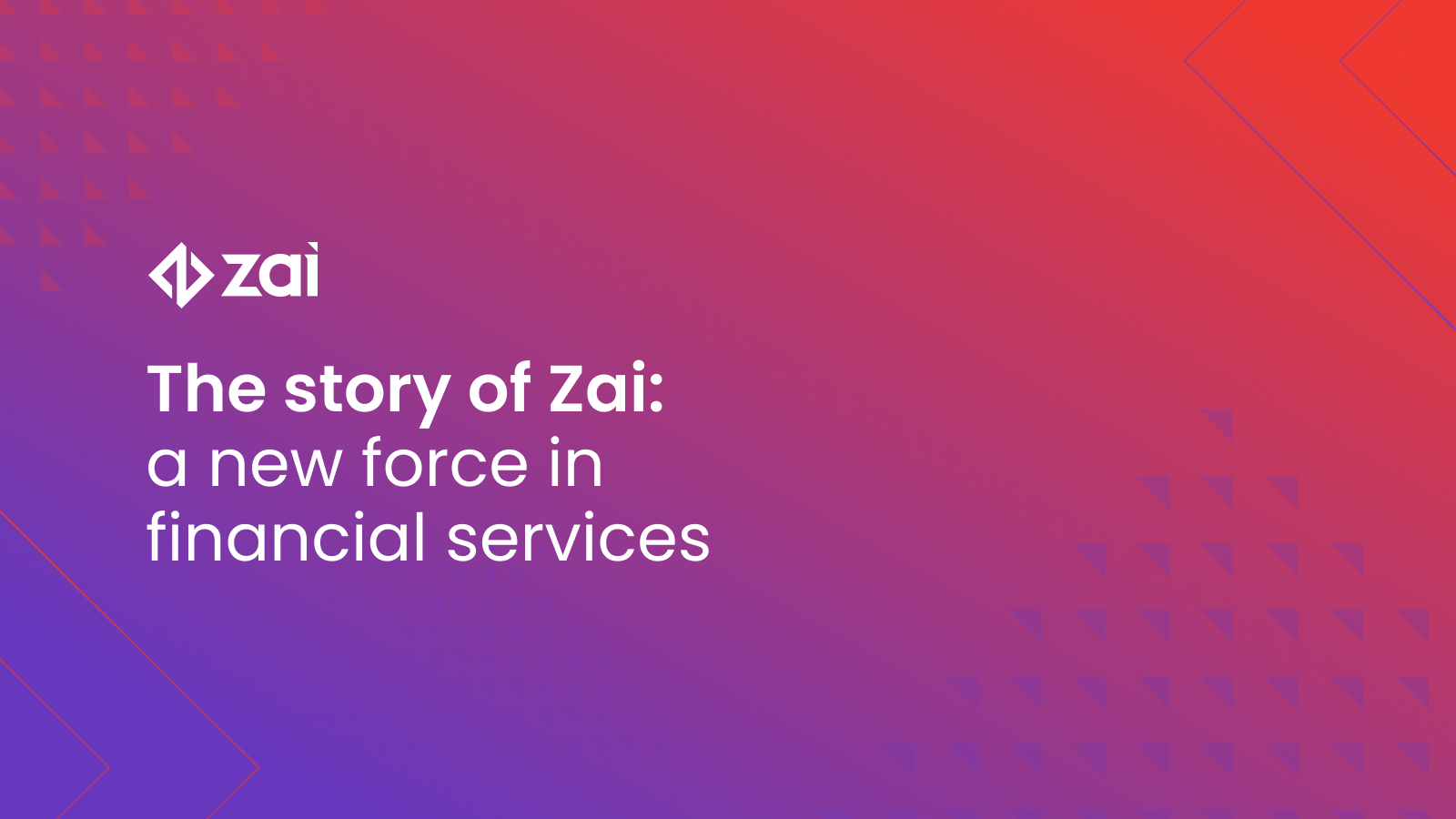 The birth of any new company is usually underpinned by a backstory replete with dramatic twists and turns involving varying degrees of inspiration, perspiration
and luck. The genesis of Zai is no different.

The dawning of a new era

Our story begins in the early 2000’s when Australian-born Brett Meyers and his fellow countrymen and CurrencyFair co-founders, Jonathan Potter, Sean Barrett and David Christian, set about solving the problem of expensive and inconvenient money transfers and currency exchange.

“As an Aussie expat living in Ireland I often needed to convert money,” explained Meyers. “I'd been sending money back to Australia and other times, I'd need to bring money over and I realised how expensive it was. The banks charged an upfront fee but when I realised that the margin the banks were building into the exchange rate was usually north of 3% and Australian banks would usually charge about 5% I started to think, that's not really very fair. There must be a better way to do this.”

By 2009 Myers, a software engineer in the banking sector, had become an Irish citizen and spent much of that year talking to business support agencies and would-be investors while his colleagues worked in their spare time turning their shared vision into a viable venture.

They raised €400,000 in that first round of fundraising and by April of that same year CurrencyFair was officially born, with two of the co-founders able to go full-time on the project by July.

Fast-forward to April 2010 and the CurrencyFair platform was launched as a peer-to-peer currency exchange with six staff. The mission was not just to provide lower-cost foreign currency transactions, traditionally done at a higher cost by banks, but to also simplify and accelerate the process for consumers.

Just over one year later in July 2011, CurrencyFair completed its fourth funding round for €670,000, raised through a combination of angel investors and the Irish government’s development and growth agency Enterprise Ireland, to add to the €980,000 already acquired. The company had, by now, helped customers save €1 million.

In 2012, CurrencyFair won its first award - Best of Show at Finovate Asia 2012 - and was starting to garner positive global media coverage of its innovative and disruptive product in notable publications including The Australian, The Economist and The Telegraph.

By 2013 the team had grown to 25 employees and more accolades followed including winning the Most Insightful and Intriguing Internet Innovation at the IIA Dot IE Net Visionary Awards and TNW’s Irish Startups Award. It was also shortlisted as one of the Best Middleweight Start-ups at the Europas and passed a significant milestone having processed €500 million in transactions. Irish Taoiseach (Prime Minister), Enda Kenny, was recruited to launch the new CurrencyFair website, simultaneously announcing the creation of another 30 jobs.

However arguably the biggest development of 2013 and one which, at the time, no-one could have predicted would become such an integral part of the Zai story,
was the launch of PromisePay in Melbourne, Australia by Darren McMurtrie, Simon Jones and Simon Lee. Their software would aim to collect, hold and release
payments based on agreed project milestones.

“Whether you’re an established business or a lone freelancer, cash flow is king. As someone who has been both, I was sick of the constant stress and time spent chasing client payments. We want PromisePay to remove the risk of doing business and inany project-based industry.”

The then Westpac-backed payment platform opened offices in Melbourne and San Francisco that year. By 2014 PromisePay had expanded further into Singapore and the Philippines, while back in Ireland CurrencyFair was progressing steadily along its own growth path to 47 employees and over €1 billion in processed transactions, becoming the first money transfer company to hit this milestone.

CurrencyFair doubled its workforce in 2015 to 94. By this time the company had helped customers transfer US$2.5 billion since its formation and was about to complete another round of funding for S$14 million to build the next generation of the platform, develop the marketing function and double the team at its Australian base in Newcastle, New South Wales.

It also launched its mobile app and outgrew its original Dublin offices, moving into the former Bank of Ireland offices in Ballsbridge to facilitate further expansion.

Back in Australia, PromisePay onboarded its first customers in 2016 and set up entities in South Africa and New Zealand as well as a new office in St. Louis, Missouri, USA as it raised AU$10 million in investment to secure the next phase of its growth to simplify complex payment workflows through flexible API technology.

“There are thousands of platforms looking to create fast, simple and trusted payments between buyers and sellers that don’t know each other,” explained Lee. “It’s a great deal more complex than just a payment; it’s an entire experience, and our technology delivers that experience seamlessly for platforms all over the world and with full protection to all parties.”

By 2016 CurrencyFair had helped its customers transfer €3.1 billion, saving them €160 million in transaction charges along the way.

In October that year, an important new character entered the CurrencyFair
story as serial Irish entrepreneur Paul Byrne discovered the company: “I was
a customer,” explained Byrne, “using CurrencyFair to transfer the proceeds
of the sale of a business in the US from dollars to euro. I didn't know Brett
personally but I got to meet him through mutual contacts.”

2017 was a pivotal year for both companies as they looked to move through the next stages of their impressive trajectories.

PromisePay rebranded to Assembly Payments, a name which, at the time, Lee said: “better reflects the nature of our platform.”

“Payments are the centerpiece of a great customer experience and  companies are sick of being stifled by old, legacy payments systems. So we tore the whole system apart and let anyone re-assemble it however they like.”

In 2017, Assembly Payments also inked its first major partnership deal with classified ads giant, Gumtree and was increasing its revenue 25% month-on-month. It was active on over 100 platforms, including Airtasker, Hipages, Flippa and Carsales.com.au. and had raised over AU$13 million from investors. It also took home an Excellence in Payments award from Fintech Australia. It was quite the progression in four short years.

On the other side of the world, CurrencyFair too was levelling up. Byrne invested in CurrencyFair and became CEO while also mentoring Meyers who shifted his
focus to product development. The infrastructure was enhanced and the website redeveloped – now SMEs could use the service.

In October that year, CurrencyFair was listed in the Top 20 Fintech Companies
in Ireland by Irish Tech News, and the following month appeared in the list of Fintech Start-ups in Europe to Watch in 2018 by Silicon Republic.

By July 2018, CurrencyFair had traded over €7 billion, and as planned, had become
profitable. Then in August, it announced its expansion into the fast-growing Asian
payments markets with a €20 million investment and debt-based backing from a
number of investment firms, buying out Hong Kong firm, Convoy Payments, while also acquiring licences for both Singapore and Hong Kong, keeping a keen eye on China.

In Australia, Assembly Payments became the first non-bank financial institution to launch real-time payments via the national New Payments Platform (NPP) and completed over US$2 billion in transactions by year end. It also received a LinkedIn Award Top 10 Startup Winner for Best Employer and would do so again in 2019 basing its staff recruitment and retention policy on its five principles of excellence, curiosity, empathy, ownership, and customer care.

Meanwhile CurencyFair’s Asian expansion was continuing apace via a partnership agreement with Chinese online trade network, Buy-World and it would continue winning plaudits, lifting a Spiders Award for Best in Fintech in 2019 too.

2020 was a challenging year as the Covid-19 pandemic raged around the world but CurrencyFair and Assembly Payments successfully weathered the storm.

Assembly Payments, recognising the global opportunity for its platform, entered a joint venture with Standard Chartered Bank to power the next generation of global payments while growing partnerships across APAC, EMEA and the Americas. Its Singapore headquarters was established and in August, Tim Dickinson and Rimal Gokani (formerly of SC Ventures, Standard Chartered’s innovation and venture arm) were appointed co-CEOs.

It was also the year CurrencyFair came on SC Ventures radar. It recognised the synergies between the Irish platform and Assembly Payments and agreed to invest in it, paving the way for a merger.  This partnership came to formal fruition in April 2021 with the announcement of the merger of CurrencyFair and Assembly Payments which would facilitate the acceleration of the global scale all parties were shooting for.

Support for the merger came from Standard Chartered Bank whose Group Chief Executive, Bill Winters, said: “By bringing together the complementary strengths of CurrencyFair and Assembly, we are supporting the merged company in offering the full range of payment services, providing retail and corporate clients access to fast, high-volume domestic and cross-border payments.”

While Byrne, CEO of CurrencyFair said: “The merger is a natural evolution. It marries the ambition, talent and product expertise of Assembly Payments just as it was ready to scale internationally with CurrencyFair’s existing global footprint of offices, employees, regulatory licenses and banking partners.

“We now move beyond simple transactions towards building a company which allows businesses and individuals to access, build, connect and use any payment service.”

A new force in financial services

On 10 September, 2021 the newly merged company received regulatory approval and became one organisation supporting two distinct brands.The CurrencyFair marque will continue to service its loyal and ever growing consumer and self-serve micro-business segments with currency exchange and international payments, while the newly birthed Zai will service mid-market and enterprise-level customers with a broad array of financial services.

Byrne takes responsibility as merged company CEO, presiding over an strengthened leadership team, including key new hires, as the organisation plots its growth trajectory from around 170 employees to over 450 by 2025.

The company will focus its enterprise-level offering initially on the Australian market, where its Assembly Payments customer base gives it a strong foothold and where Zai has a clear ambition to be the number one fintech platform, while it quickly ramps up capability to launch in the UK, US and selected Asian markets in 2022.

And so the story of Zai is now partially written, but it will continue to evolve as the vision of a handful of key innovators and entrepreneurs is transformed into limitless opportunity for businesses and consumers around the globe. That next chapter will be written by the exceptionally talented team, both those who continue to contribute to this exceptional venture, and the new people who chose to join our journey and play their part in reinventing financial services.

Have you got questions about our rebrand? Read our FAQs here.