The global e-wallets landscape: 2023 and beyond 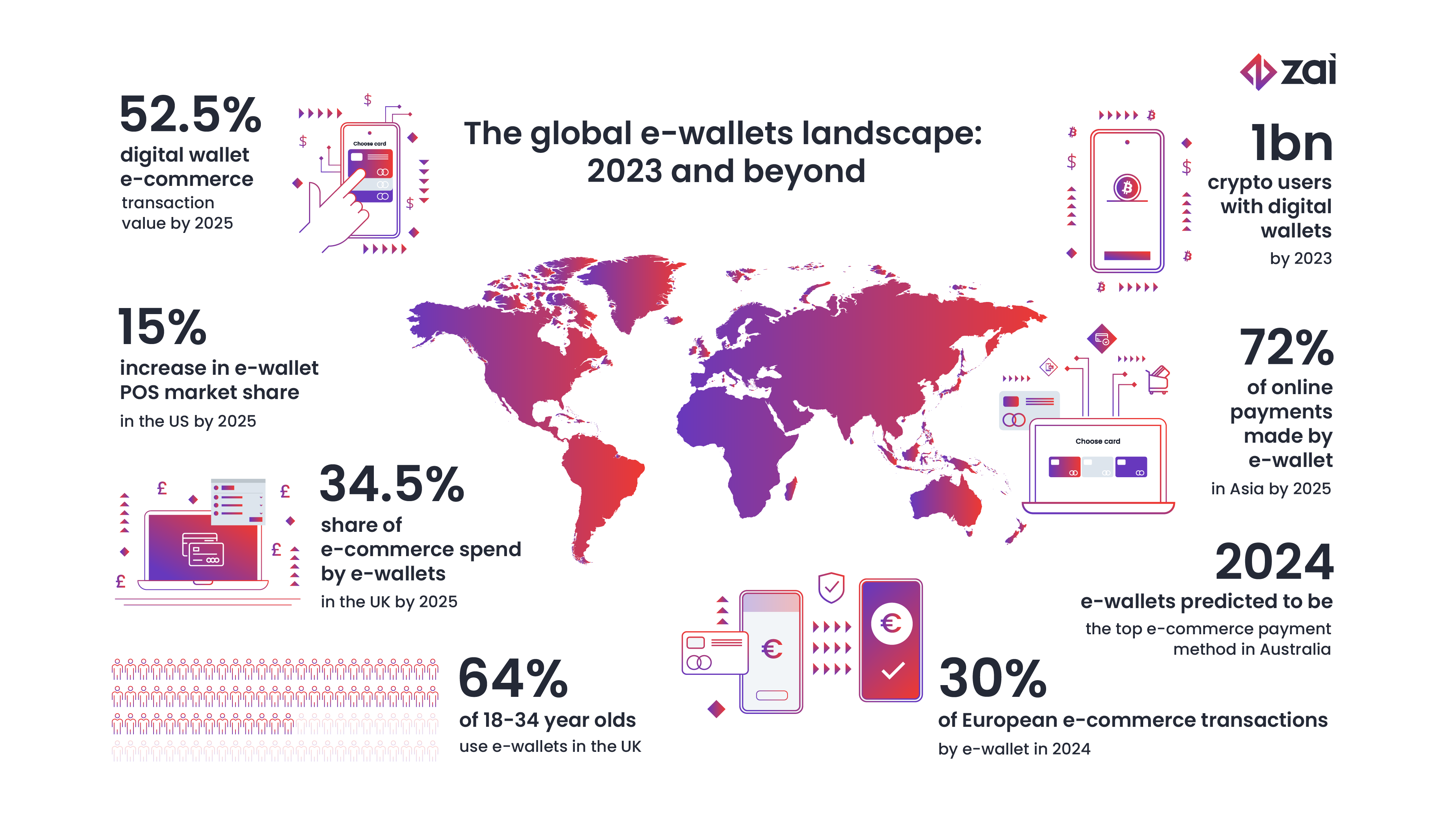 Defining an e-wallet can be difficult. For starters, they go by many names. As well as e-wallets, they’re known as digital wallets, mobile wallets, stored value facilities, non-stored value facilities, and purchased payment facilities. On top of this, their use and definition differs from one region to another. For example, some regions don’t consider Apple Pay an e-wallet as it doesn’t technically store any actual currency. That’s in contrast to e-wallets like Skrill on to which users prepay currency, similar to a gift card. Meanwhile, the eruption of cryptocurrencies - and their reliance on digital wallets for coin storage - has added another layer of confusion to the mix.

In this article, we’ll examine the forces behind that uptake, the roles e-wallets play in financial lives across the world and what the future looks like for e-wallet providers and users.

How APIs can help companies be more agile 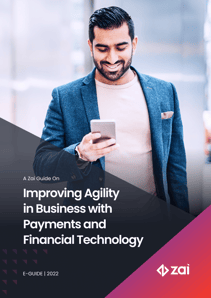 The view from the US

Although mobile wallet use in the US is increasing, the card is still king when it comes to POS transactions. In 2021, just 11% of POS transactions came via e-wallets in comparison to a combined total of 70% for debit, credit and charge cards. However, the e-wallet POS market share is expected to increase to around 15% by 2025, mostly at the expense of cash.

Online, e-wallet use is surging and is broadly equal to card spend. Both taking up around 30% of the transaction share. This trend is expected to rise further and take over a third of the market by 2024, driven by the uptake of Apple Pay, Google Pay and other “pass-through” mobile wallets (i.e., wallets that hold cards).

The US e-wallet landscape is made up of a variety of wallet types. PayPal, the predominant e-wallet with 36% of holders using it as their primary wallet, can operate as both a stored-value and a non-stored value wallet, as it can be connected directly to a bank card or simply topped up. In contrast, the second most popular e-wallet is Apple Pay, which 20% of e-wallet holders use as their primary wallet, a non-stored value, pass-through wallet.

The third most popular is Venmo (16%), which operates in a similar way to PayPal.

E-wallets have been getting quite a bit of attention from the US Congress recently. In April 2022, Congress held a hearing entitled “What’s in your digital wallet?”, which focussed on
consumer protections in electronic payments and weighed up the option of supporting unbanked Americans with a form of e-cash or stablecoin. Since then, the debate has raged on, but as of August 2022, a decision is yet to be made.

The view from the UK

The UK online and mobile commerce market is the most advanced in Europe, with just a small minority of non-digital buyers. As a result, e-wallets have been the main online payment method since 2020 in the UK, with most major retailers equipped to take payments via Apple Pay, Google Pay and PayPal. Just over a third of UK consumers now have a digital wallet and as of 2021, e-wallets made up for 32% of all e-commerce spend. According to World Pay Global, this will rise to 34.5% by 2025.

For POS transactions, e-wallets still have a bit to go and only make up around 9% of all transactions with debit cards (45%), credit cards (28%) and cash (11%) still leading the way.

Apple Pay is the dominant e-wallet force in the UK, with one report putting its market share at around 46%. PayPal still maintains a healthy presence with 41% and the remainder of the market is taken by fellow mobile wallets Google Pay (9%) and Samsung Pay (3%).

Gen-Z and Millennial use of e-wallets is considerably higher than most, with 64% of the 18–34 age bracket using the payment method. That drops to just 18% amongst 54–65 year olds. Expect usage to increase further as Generation Alpha (anyone born after 2010) reaches spending age.

In June 2022, the UK government announced plans to bring stablecoins (a form of crypto asset typically pegged to a fiat currency) within the country’s payments regulations. As use of stablecoins and general crypto-currency increases, this should create opportunities for e-wallet providers to reach a wider market.

The view from Europe

E-wallet use is on the rise across Europe and is now the most used payment method in the region’s five largest e-commerce markets: France, Germany, Russia, Spain and the UK. In 2021, e-wallets accounted for 26.7% of the continent’s online transaction value. This dominance is expected to grow with e-wallets set to account for up to 30% of e-commerce transactions in Europe by 2024.

Across the continent, PayPal is the dominant e-wallet overall, while Apple Pay and Google Pay have a strong presence too. However, there’s a lot of regional variety and local players. These include YooMoney and Qiwi in Russia, iDEAL in the Netherlands and Swis in Sweden.

There are huge disparities across the continent in terms of payment methods. In 2021, 4% of POS transactions in Norway were cash. In Spain, it was 47.1%. Success surely beckons for any e-wallet provider able to penetrate the cash-heavier markets.

In an attempt to curb the use of crypto for money laundering and terrorism, in July 2022, EU lawmakers agreed on a set of compliance requirements for crypto service providers. The requirements mirror the EU’s “travel rule”, which already applies in traditional finance, and states that information on the source of the asset and its beneficiary travels with the transaction and is stored on both sides of the transfer.

How this will work in practice remains to be seen, but will impact both “hot” and “cold” wallet holders.

The view from Asia

Asia was the first region in the world where the use of e-wallets took hold and that shows no sign of stopping - especially when it comes to online payments. E-wallet payments made up 68.5% of online APAC transaction value in 2021. This is projected to expand to over 72% by 2025, the equivalent to over US$3.1tn.

This trend is driven primarily by huge uptake in China, where e-wallet payments accounted for nearly 83% of e-commerce transaction value in 2021. The numbers out of India (45.4%), Indonesia (38.8%) and the Philippines (30.5%), although much smaller, are still impressive.

Across the region, e-wallets also top regional POS payments. However, this is disproportionately concentrated in China, where e-wallets outperform all other POS methods, accounting for 51% of translation value in 2021. The reason for this is the now ubiquitous QR codes used for payments from dominant mobile wallets Alipay and WeChat Pay,

The region’s second highest POS e-wallet penetration can be found in India. There, in 2021, e-wallets made up 24.8% of POS transaction value, less than half of China’s.

Although there are a number of e-wallet providers across the region, the dominant forces are the super apps (more on this below). These include WeChat or Alipay in China, Grab in Singapore, Gojek in Indonesia, KakaoTalk in South Korea and Paytm and PhonePe in India.

The rise of the super apps

As mentioned, the defining e-wallet providers in Asia are almost all super apps. These are apps that do pretty much everything; social media, shopping, ride hailing, banking, games, news, and more. Many of these apps, such as Alipay in China and Paytm in India, started as payment apps.

Their growth can be largely put down to the large number of unbanked people in the region, compared to the number who own mobile phones. As recently as 2021, 20% of China’s citizens were unbanked (in contrast to 7% in the US), while some countries in the region, such as Vietnam and the Philippines, have an unbanked population of over 60%. When the apps that became the super-apps first began offering payments in the mid 2010s, these numbers were even higher.

In contrast, mobile phone usage has been high for a long time and continues to grow. As such, providers could quickly gain market share as they were able to keep such a massive proportion of people’s spending in one place.

The view from Australia

The e-wallet market in Australia is growing, but online credit cards still reign supreme. In 2021, they accounted for nearly a third of e-commerce payment value. In contrast, e-wallets made up 25%. However, Global World Pay predicts that e-wallets will take the number one spot from credit cards by 2024.

For POS sale transactions, just 11% of the payment value was made via e-wallets. This is projected to see 5% CAGR through to 2025.

PayPal remains the biggest e-wallet used down under. But Apple Pay, Google Pay and Samsung Pay are also prevalent. Due to the over 600,000 Chinese-born residents in Australia, China’s WeChat is also highly used.

QR Codes to be introduced

Late in 2021, it was announced that Australia’s Eftpos national debit card system was launching a QR code-enabled mobile payments and rewards network to enable “seamless payment experiences across e-commerce, mobile and point of sale”. This has now been trialled in stores across the country. QR code POS payments have been particularly successful in China and the US.

Regulatory landscape set for a shake-up

At the end of 2021, the Australian government released its plan for "Transforming Australia’s Payments System" after almost two years of discussions by the Parliamentary Joint Committee on Corporations and Financial Services. E-wallets were covered extensively, with the reporting noting the development of all types of digital wallets in recent years.

Over the remainder of 2022 and through 2023, the Australian government has indicated it intends to amend all existing payments regulation and to “create a fit for purpose regulatory framework providing protections for consumers, and that he would further consider both the issue of de-banking, and the refusal of mainstream banking to allow FinTech to engage.”

What next for e-wallets?

What remains to be seen is how e-wallets will be used as the digital payments landscape evolves over the coming years. Buy now, pay later (BNPL), for example, is becoming one of the fastest growing payment methods, especially in Europe and the UK. There's already some overlap with the two payment methods, with PayPal offering credit and recently launching Pay in 3, mirroring one of Klarna’s flagship products. Apple has also announced plans to launch Apple Pay Later, their own BNPL offering.

This overlap will likely only grow as the implementation of embedded finance increases. According to one study, across the UK, Germany and Belgium, 75% of retailers are using embedded finance to offer financial products such as cards, BNPL schemes and loyalty incentives, while 56% are planning to introduce more in the near future. Embedded finance will allow these companies to offer e-wallet services too.

All this begs the question: is the super-app going to become a global phenomenon? Many global corporations like Walmart and Amazon have already floated the idea.

Furthermore, analysts predict there'll be around one billion cryptocurrency users by the end of 2022. And they’re all going to need digital wallets.

What’s certain is that e-wallets are now an established part of the global payment landscape. Use is rising in every geography and as the world moves further towards a cashless society - and e-wallets continue to provide financial services to the unbanked population (estimated to be around 24% of adults globally) - this is only going to gather pace.

Get in touch to discover how Zai solutions can improve your payment systems.  And don't forget to download our guide on how you can use payment technology to improve business agility.

Intelligent payment routing: How it works and top use cases

Multi-party payments: How they work and when to implement them